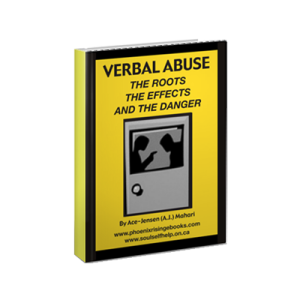 In this ebook, Verbal Abuse – The Roots, The Effects, and the Danger, A.J. Mahari provides a revealing and informative exploration of the scope and reality of verbal abuse and its impact on those who are victims of it. In this 101 page collection of 20 articles Mahari outlines and debunks 10 Common Myths about verbal abuse, outlines things that people need to look for if they aren’t sure if they are a victim of verbal abuse. A.J. examines the hook of verbal abuse that draws people into toxically abusive relationships. Also explored is the shame that results for those who are verbally abused and the reality of how this abuse flourishes behind closed doors.A.J. Mahari, writes, “Verbal abuse is in and of itself formidable, damaging, and insidious abuse. It is not a lessor form of abuse. It has many dangerous effects and leaves in its wake a legacy of toxic relating and self-hatred” 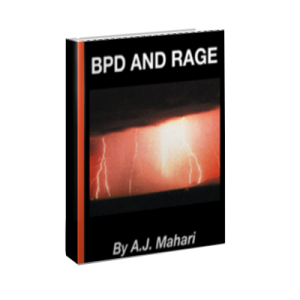 This ebook consists of 7 chapters – 114 pages of detailed examination, understanding, and explanation of Borderline Rage from the insightful perspective of one who has been there. A.J. provides a roadmap of hope and practical steps to help the borderline stop the rage and/or stop the self harm and heal the wounds, and transform his/her life.

When one understands why he/she rages, what drives the rage experienced, acted upon, and inflicted upon self and/or others, in those diagnosed with Borderline Personality Disorder real change and recovery can begin. It is only with this insight and understanding that those with Borderline Personality Disorder can put an end to borderline rage. Borderline rage that has served as a protection against abandonment pain and abandonment trauma, or as Mahari calls it, the core wound of abandonment that houses your pain. It is the connecting to and learning to express this pain in healthy ways that is at the heart of addressing the habitual and often compulsively impulsive rage chosen unconsciously. Those with BPD can become more conscious of the roots of their rage and learn to make new and much more effective and healthy choices that will put them on the road to recovery from BPD.

There is hope for change and for recovery. A.J. Mahari, who is now 53 years old, has been there and recovered, 15 years ago, from BPD and her 35 years of rage. From her own experience through recovery A.J. outlines and explains the 10 Keys and the 5 major Roadblocks to ending Borderline Rage.

Those diagnosed with BPD, in a relationship (friend, family member, significant other, ex-partner) with someone with BPD, as well as any professional treating someone with BPD will benefit from the insight A.J. Mahari shares based upon her own recovery from BPD. 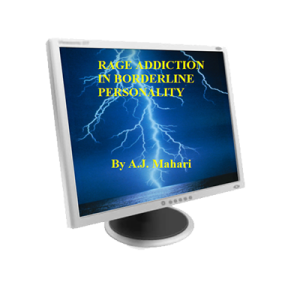 Rage Addiction in Borderline Personality Disorder examines the reality that rage often becomes an addiction for those with BPD.

In the audio program, “RAGE ADDICTION IN BPD” A.J. Mahari outlines and explains the formidable reality that the rage addiction is to finding recovery from Borderline Personality Disorder. Mahari talks about Rage and the reality that it is an addiction for most with BPD. As Mahari points out, as someone who has had BPD and recovered, been addicted to rage, and who no longer rages, “Rage is an addiction in BPD. It is manifested outwardly in yelling, screaming, name-calling verbal abuse, throwing things, breaking things, even physically abusing others. It is also manifested inwardly by many with BPD who self-harm. Rage is at the heart of cutting, and other forms of self-harm. Even the so-called “quiet borderline” may well be rage addicted. Quiet borderlines often emotionally abuse themselves in brutal and damaging ways and this too is a manifestation of rage.”

Mahari describes in detail the anatomy of rage addiction in Borderline Personality Disorder and explains how it is all about choice.

Tracks in Part One of this audio program include: