A.J. Mahari has written 3 ebooks that all deal with aspects of what she has termed the “core wound of abandonment” in Borderline Personality Disorder. In this bundle you can purchase all 3 ebooks together.

A.J. Mahari has written 3 ebooks that all deal with aspects of what she has termed the “core wound of abandonment” in Borderline Personality Disorder. In this bundle you can purchase all 3 ebooks together. This purchase package is for anyone wanting to learn much more about Borderline Personality Disorder whether you have BPD or are a non borderline and know someone who had BPD.

Included in this 3 Ebook Bundle are the following ebooks: 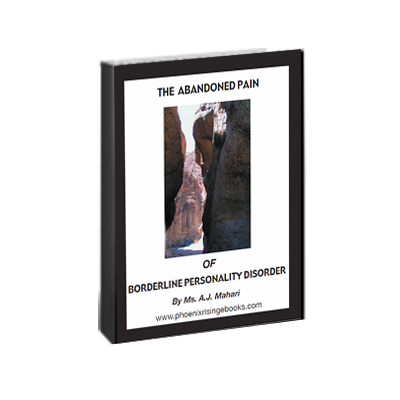 A.J. examines the reality that, for those diagnosed with BPD, the abandonment of one’s own pain is the result of the distorted belief that it must be escaped at all costs. Outling that those who go on to develop BPD had to initially abandon their pain in order to actually survive psychologically, albeit in fragmented pieces. However, in adulthood those with BPD must now welcome back in this abandoned and dissociated pain in order to integrate the fragments of self. It is these fragments of self and the loss of one’s authentic self that leaves those with BPD without a known identity or stable sense of a known self. Being held at bay, dissociated from one’s own authentic self by this abandoned borderline pain is what keeps those with BPD so stuck in untold profound suffering, isolation, learned helplessness, and alienated loneliness.

The Legacy of Abandonment in Borderline Personality Disorder 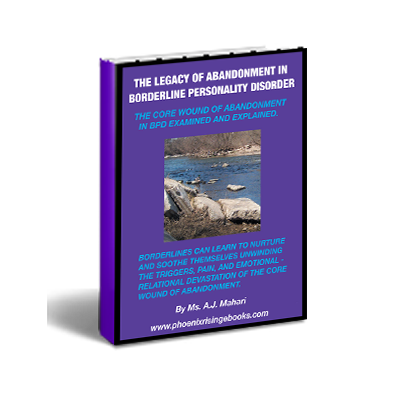 In this comprehensive ebook, A.J. outlines the definition, scope, and meaning of the core wound of abandonment. She describes it as the central wound that drives the emotional and relational devastation experienced by those with BPD, those who treat them, and those who care about and/or love them.

Whether you have BPD or are in (have been in)a relationship (friend, family member, significant other, ex-partner) with someone with Borderline Personality Disorder, as well as any professional treating someone with BPD will benefit from the insight A.J. Mahari shares from her own borderline experience, and her journey to her recovery from BPD.

The Shadows and Echoes of Self – The False Self in BPD 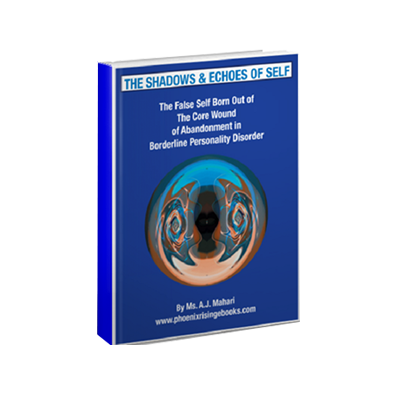 In this ebook A.J. Mahari examines the root cause of the false self in BPD. Included is a comprehensive look at the similarities and differences between Borderline Personality Disorder (BPD) and Narcissistic Personality Disorder (NPD). A.J. Mahari delves into the subject of cultural narcissism as a backdrop for the narcissism housed within BPD exploring the reality that narcissism is not just a stalwart of NPD. Mahari explores various archetypes and myths aimed at increasing the readers understanding of narcissism in a cultural context.

With reference to Plato’s Myth of the Cave and Jung’s Shadow Self, Mahari defines and paints an accurate picture of the false self of BPD, its pathological narcissism, and its need for narcissistic defense mechanisms and the effect that this has internally for those with BPD and externally for those around them – non borderlines.

Mahari knows from personal experience that it is only by becoming aware of one’s borderline false self and its pathological narcissism that those with BPD can then do the work of uncovering and finding the lost authentic self. The authentic self that was lost to the core wound of abandonment in early chlidhood. This is the road to recovery for those with BPD. It must first begin with a mindful and radically accepting awareness and understanding of the borderline false self and its bubble of narcissism.