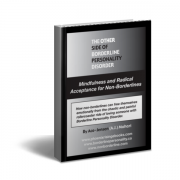 This ebook consists of eight chapters that will enhance the journey of anyone who has (or has had) a borderline in his/her life. A.J. Mahari writes insightfully about how Non-Borderlines can free themselves from the chaotic painful drama of the borderline in their lives through the practice of Mindfulness and Radical Acceptance. 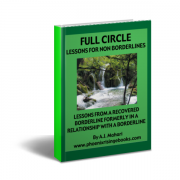 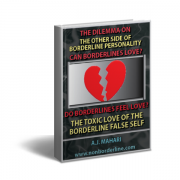 The Dilemma on the other side of Borderline Personality Disorder, for the Non Borderline is a painful one. It is a dilemma driven by many questions. The source of those questions can be difficult for non borderlines to face. A.J. Mahari addresses what is at the heart of the non borderline dilemma, can borderlines love? Do borderlines feel love? Mahari not only answers these questions from the perspective of a recovered borderline but she also explains with incredible and unique insight of one who has been there why borderlines love the way that they do. 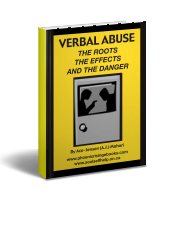 © A.J. Mahari March 2007
In this ebook, Verbal Abuse – The Roots, The Effects, and the Danger, A.J. Mahari provides a revealing and informative exploration of the scope and reality of verbal abuse and its impact on those who are victims of it. In this 101 page collection of 20 articles Mahari outlines and debunks 10 Common Myths about verbal abuse, outlines things that people need to look for if they aren’t sure if they are a victim of verbal abuse. A.J. examines the hook of verbal abuse that draws people into toxically abusive relationships. Also explored is the shame that results for those who are verbally abused and the reality of how this abuse flourishes behind closed doors.A.J. Mahari, writes, “Verbal abuse is in and of itself formidable, damaging, and insidious abuse. It is not a lessor form of abuse. It has many dangerous effects and leaves in its wake a legacy of toxic relating and self-hatred”