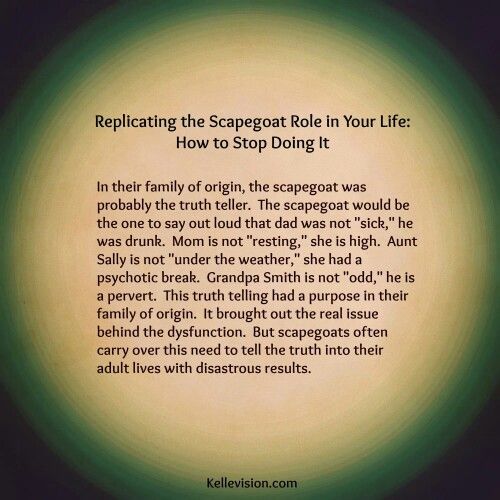 Usually in toxic dysfunctional families, especially, where one parent (or both have) has a personality disorder and Borderline Personality Disorder and/or Narcissistic Personality Disorder mother picks a Golden Child and a scapegoat child. If there are more than two children, the other children are usually the lost children. Everyone suffers but the one who suffers the most and needs to come to terms with this in adulthood is the scapegoated child.

I was a scapegoat child. I understand this so very well and the pain and legacy involved from my own childhood experience and the ways the legacy of that childhood experience has been impacting in my adult life. Every child, now adult, who was the family scapegoat, will benefit so much from learning more about how this has effected you and is likely still effecting you in some legacy way in your adult life now.

In one way or another, I have been dealing with this my whole life. In a much smaller, limited way, I am still dealing with it. I will have an audio available on this site soon that not only shares my experience of being the scapegoat child but also one that talks about the legacy that experience and wound that we take with us subconsciously into adulthood. How the pain of having been the scapegoat child is re-played out in adult life may shock you.

Being the scapegoat child is such an incredibly painful role to be given. It means you are being used, not loved. Taken advantage of. It also means you are not seen or heard or valued for who you are. You suffer terrible emotional abandonment that effects each scapegoat child in some common ways but also a variety of individual ways.

Everything about you that is held a “true” by your toxic dysfunctional family of origin is not true. Yet the gaslighting, lying, blaming and shaming parent seeking to dump all of their feelings about themselves that they cannot deal with on to you projects out their own self-hatred onto you. There is no love in this. No unconditional love or acceptance. You are not seen and esteemed as a worthy individual. Rather you are a mere extension of the personality disordered parent.

Yet, as children, the scapegoat child takes it all in. Feeling unloved. Believing he/she is unlovable. Learning the “don’t talk rule”. Feeling wrong. Feeling unworthy. Feeling so alone and isolated. Feeling that difference of how you are treated and mistreated. The being blamed for everything and anything that a parent or parents feel and then gaslight your siblings and others in the extended family or even your neighbourhood to think or believe (so wrongly) about you causes so much internalized shame. 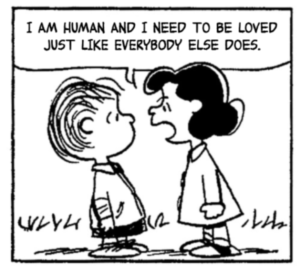 It feels totally intolerable whether you understand it or not. I grew up not understanding for most of my childhood and teenage years. I just remember that terrible sense of injustice and it being so unfair. I was so hurt and so angry. It caused me to mount many defenses against both my sibling and my two personality disordered parents. It creates jealousy and other feelings in us as the scapegoat child that are not really who we are or how we would choose to feel. We drown in their condemnation of us. We lose ourselves, to varying degrees in this gaslighting, manipulative, and very abusive blaming and shaming and the punishment that we are forced to deal with – punishment that belongs, really, to the Golden Child, not us. It does so much harm. It destroys trust. It is abandonment. It is also a block to our truly understanding ourselves and our worth and all the good qualities that are never validated, seen, cared about or even mirrored to us by the personality disordered parent who scapegoats us

The scapegoat child is the sensitive child. Is the truth-telling child. Is the empath child. Is the whistleblower child. Is the child that will act out the family system’s toxic dysfunction in what are cries for help subconsciously and then will be shamed, punished, and/or shunned and rejected even further for trying to meet his or her own needs. The scapegoat child may internalize all the negative hateful messages and believe them ending up self-harming. Other scapegoat children will act out, fight back, emotionally react, be volatile and show all the signs of their trauma and  pain outwardly. Either way, both the acting in or acting out scapegoat child, is in his or her own way, trying, subconsciously, to draw attention to the hell they are going through. Each one of us needed someone to see it, to “get it” to rescue us, to help us, to save us. For most of us, there was no one. In most toxic dysfunctional families, no one goes against the personality disordered parent, sibling, or relative. Rather they join with them to scapegoat the child further so as not to be in that line of most traumatic emotional, verbal, and even physical fire..

If you were a scapegoat child, you may still be trying to figure all of this out. You  may still not understand why you were the scapegoat child. You may, tragically, still believe that it is because you were bad, wrong, or that you deserved it. That is not true at all. What is true is that you were not loved, not seen, not parented in a way that was healthy or that would allow you or give you the opportunity to really know and understand who you were and actually are versus the “inner-critical voice” of the scapegoating personality disordered parent.

Very sadly and so  painfully for many a scapegoat child they go on to get into relationships in their adult hood with personality disordered partners who will continue to scapegoat them. Something will feel very familiar but you may not yet have put your finger on it or had that deep moment of realizing what is happening to you now that you have had a life time of.

Why were you scapegoated in the first place? Did you deserve it? Do you believe you deserved it?

Please check back for those very soon.